The Seventh-day Adventist community in Dublin is constantly growing! What began as a faithful group of only 25 worshippers in the year 2000, has grown into three organised churches and other companies or groups in the capital of Ireland. Today we have many hundreds of people, of all ages, of all races, worshipping God and serving their community. That's why we need more buildings! 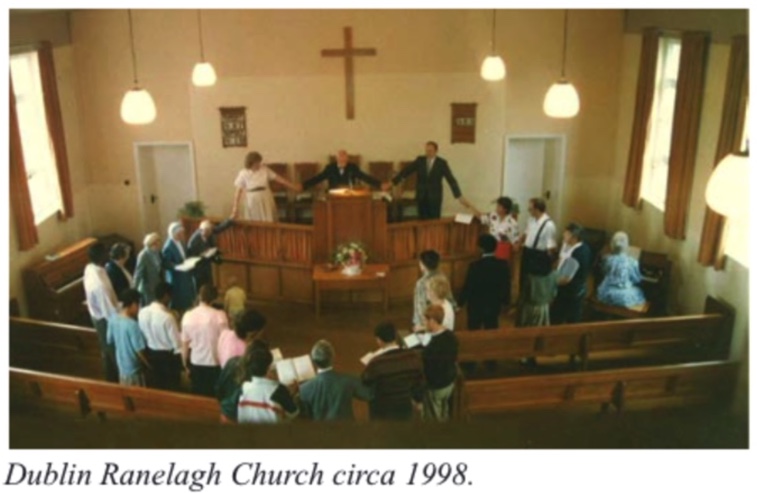 The need for a 2nd building

For many years the church has only owned one building (in Ranelagh, Dublin 6). The need for a second one became apparent, especially after Dublin had been featured as a City of Hope (2013-2015). Local pastors, administrators, lay leadership, publishing venues (Adventist Review, Adventist Mission) and even international evangelists such as Mark Finley worked together courageously in a series of steps to raise awareness of the need for a second permanent place for worship and outreach.

In its meeting on 2 February 2015, the Irish Mission Executive took the following action: VOTED “to make an investigatory application to the Trans-European Division for funds from the 13th Sabbath Overflow Offering (due in 2017) to proceed with a second church building in Dublin.”

Following the above proposal, Irish Mission president David Neal wrote an article in June 2016 informing that “The Trans-European Division has agreed for Dublin to be a project beneficiary of the 13th Sabbath Overflow offering when next allocated to the TED in 2017…”

Half a year later (January 2017), the Trans-European Division announced the projects that will benefit from the 13th Sabbath offerings, one of them being “a new church and centre of influence in Dublin”. Presenting the larger context, this communication sent a clear message: “Now with over 500 members across the city [of Dublin] there is a need for a second facility that can also become a centre of influence.”

A church in Dublin West district

The Adventist Mission quarterly featured the so called new Irish Adventists from the west Dublin area (also on YouTube in the Mission Spotlight). Articles emphasized the need for “a new church and a centre of influence in Dublin”. Of special impact were the pictures and experiences of the Dublin West church kids and youth worshipping in a school cafeteria at that time. One article concluded: “one day soon, they hope to have their very own church.”

The first worship meeting of the group in the west of Dublin (later named as Dublin West) was held on 10 of April 2010. The newly formed company worshipped for a time in the Castleknock hotel. 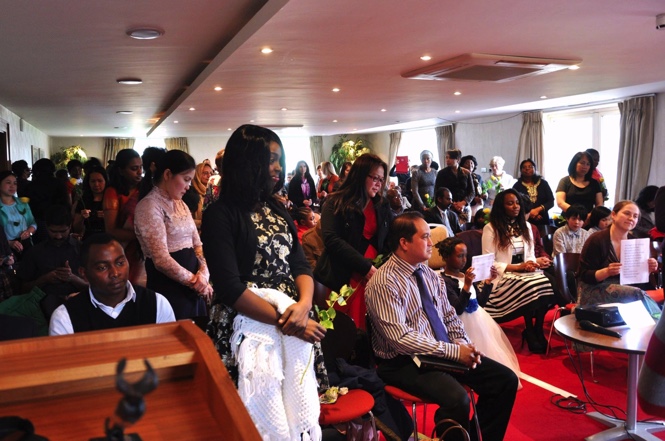 They then moved to the Coolmine Community School for a few years. In May 2017 the plans were put in place and the company become an organised church. 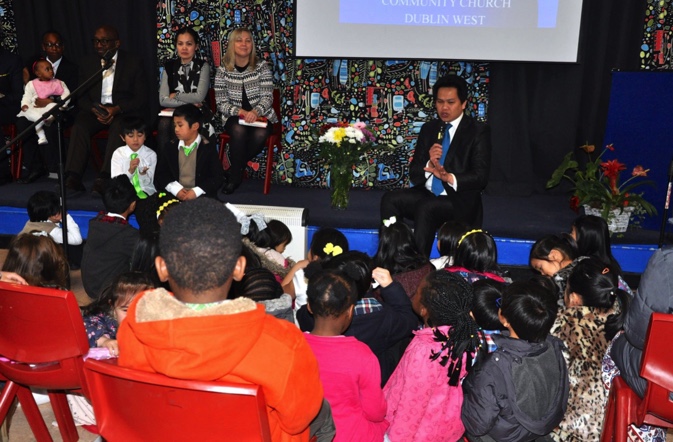 A year later, due to changed government rules, the church had to move again This time finding a haven in the Elim church (a warehouse converted into a Pentecostal church). 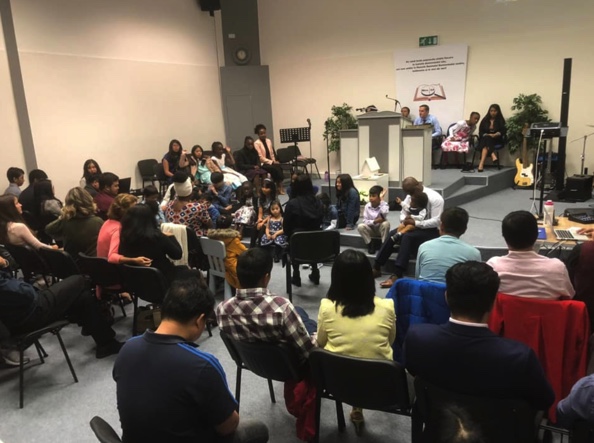 In 2020 the pandemic started. The church survived by meeting on Zoom, in houses, and even in the park with the heavens as their ceiling. 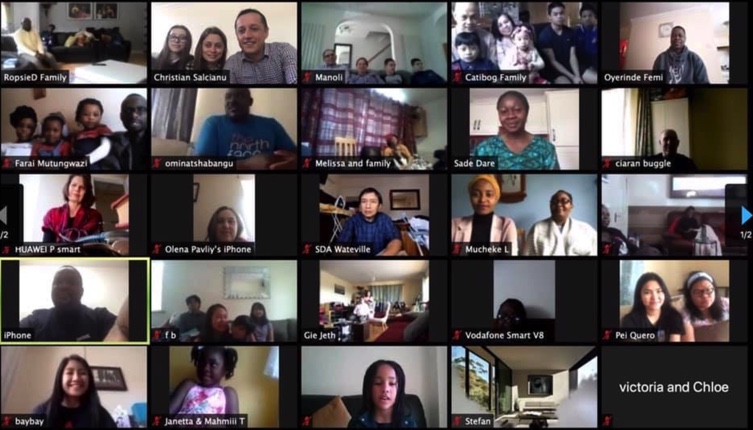 In this time two street outreach ministries developed in Dublin, one serving food to those in need and the other distributing literature. Dublin West congregation consistently provided volunteers and support for both ministries.

World-wide church in a single congregation

If you have not had a glimpse of “the great multitude” of heaven or you want to see the world-wide SDA Church in miniature, you need only to visit Dublin West Seventh-day Adventist Church. It presents a real case-study for any church, group or organisation. Here worship together 24 different nationalities (not 24 elders): from Asia, Europe, Africa, and North, Central and South America. One is compelled to see the essence of Adventism and to not focus on marginal, cultural, or national features, as important as they may be to an individual. Challenging and enriching, this is Dublin West.

Some story tellers will take a break here using words like “fast forward to”, or “to cut a long story short”… We will do the same now, and not tell you about the many meetings, talks, and planning sessions that took place; where we went back and forth, where tensions accumulated and were released. Just to give you a bit of insight: you may not know that Dublin is the 7th most expensive city in the world to build in, and the 5th most expensive city in Europe to rent in. Don’t ask us why. But just imagine you are called to live here, to work here, to serve the Lord here, and you are not a Union, not even a Conference, but a Mission. (Yes, come over and help!)

A church and a centre of influence

So, fast forward the pandemic and witness the miracle:  the local church leadership, along with the Mission administration, identified and agreed to purchase a building. What we could not find before the pandemic — due to price, or location, or other legal obstacles — following some three unsuccessful projects, we were able to find during the pandemic, as a time of crisis. Indeed, the pandemic was a blessing in disguise.

Finally, situated in the heart of the community, in a zone where the local Council approves community services, education, cultural activities and places of worship, the deal was closed on the 19 October 2021 for the building. We got the key and became the owners. 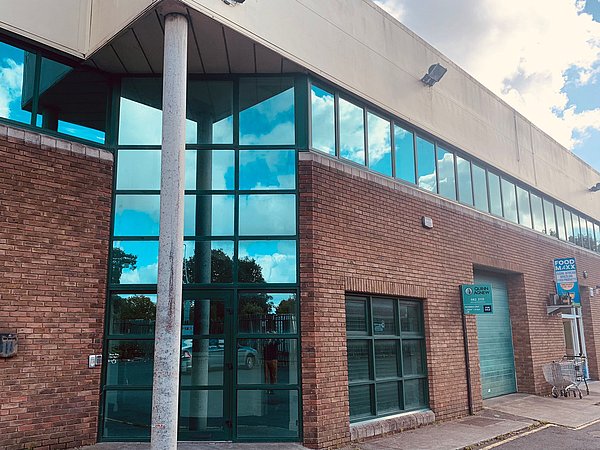 The Seventh-day Adventist Church in Ireland now owns two buildings in Dublin. Both are destined to serve as places of worship and centres of influence to the community. Now, the next part of the journey to conquer the land begins, to refurbish the building and to place God’s banner in this area. We believe that the same God who called from a burning bush will lead as a pillar of light (see God’s token to Moses, in Exodus 3:12).