Two years ago, the Longford Seventh-day Adventist Church hired a hall and ran a full week of evangelistic talks as they reached out to their local community. Local Pastor Tony O'Rourke was joined by Pastor Greg Davis in running the series.

One young man who attended was Abdul. He came to every one of the talks. However, very soon afterwards he became ill with a rare kidney disease which necessitated lengthy stays in hospital during which he was gravely ill.

The local church members visited him, comforted him and even helped with household tasks when he was allowed home. After almost eighteen months of medical intervention Abdul began attending the Longford Church, undertook bible studies and eventually began baptismal classes.  He found time to study and join the church programme even though he continued to undergo renal dialysis frequently.

On Sabbath, June 8th, Abdul walked into the waters of the River Inny which runs through the beautiful woodlands on the local Newcastle Estate. There he gave his public commitment to his love for Jesus and was baptised by pastor Tony O'Rourke.

Local canoeists looked on in amazement. It was not only Abdul who was immersed in the river Inny but a further eight young teenagers entered the baptismal waters singing and praising God as they were baptised. As Abdul left the river bank he shouted loudly "I did it, I did it. Praise God. Alleluia!"

A convoy of cars then made their way back through winding roads to the Longford Church where the candidates were presented with flowers and voted into membership followed by a delicious lunch. 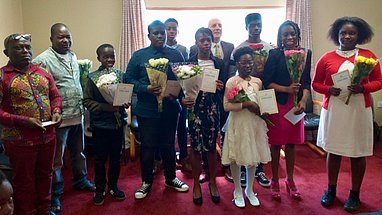 Members of the Longford Church Group continue to reach out in practical ways to support their local community and show the love of Jesus to all.

First Convert Added to the Church in Ireland During COVID-19